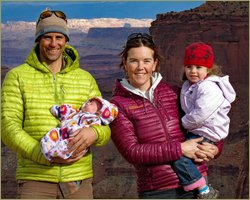 Olivia, IFMGA Guides John & Olivia Race
The Northwest Mountain School is a small climbing and skiing guide service started in 1994 and run by IFMGA - UIAGM certified guides Olivia and John Race. We are based in Leavenworth, WA and one of only a few married couples in the US to be working together as IFMGA certified guides. We have a combined 48 years of guiding experience and have worked for many large guide services such as Rainier Mountaineering, Inc, International Mountain Guides, and Alpine Ascents International. The Northwest Mountain School is the umbrella under which we offer small group trips of the highest quality to the worlds premiere climbing and ski destinations.

2018 will be the 30th consecutive season that John has made his living guiding and he hopes it will lead to another 20 seasons as interesting and rewarding as the first. A recent highlight of John's guiding career include a month-long sailing and climbing trip where John, Dave Hahn and Skip Novak accompanied a family from the Falkland Islands to South Georgia Island in the remote South Atlantic and successfully retraced Ernest Shackleton's crossing of South Georgia. In most years John spends several months in Alaska, does some ski and alpine guiding in Europe, and the puts together a variety of trips in Washington and worldwide based on what his customers are looking for. John previously served on the AMGA Board of Directors where he was the Vice President and worked to improve the level of guiding in the US and to open new opportunities for other guides going through the AMGA program. 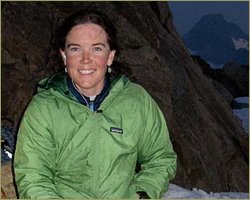 Starting in 2003 Olivia became involved in the training offered by the AMGA, becoming Rock certified in 2006 and then Ski and Alpine certified in 2007. In September of 2007 at the age of 31, Olivia passed her final AMGA exam and became the 3rd woman in US history to reach IFMGA certification (the 1st was Cathy Cosley, and the 2nd was Margaret Wheeler). Anyone who has visited John and Olivia in Leavenworth or been on a trip where Olivia was cooking can attest to the fact that in addition to being a "rippin" skier, and climber, Olivia loves cooking, particularly for tired friends back from a day in the mountains.

In December of 2007 John and Olivia were finally married at Rob Newsome's Boudreaux Cellars, and are currently one of the few couples in the world to be working together as IFMGA guides. They live together in Leavenworth, WA where they run the Northwest Mountain School. Olivia tends to hold the books, permits, and staff together, while John spends a lot of time designing and selling trips. Both lead most of the programs that they participate in, but whenever possible they run programs together. Each continues to work for a variety of other guide services such as International Mountain Guides, as well as several local independent schools.

After a combined 48 years of guiding and dual IFMGA certifications we started to see some possibilities on the horizon that had not seemed reachable before. At the heart of all of our guiding is the ethos of delivering a professional, well-organized, and enjoyable program for our customers while keeping a close eye on managing the inherent risks in all climbing and skiing programs. This is what we have chosen to do for our life's work and we take great pride in making sure that our customer's time and money are well spent on any program we are involved with.

We are currently running primarily private programs as they allow us to keep our company small and the quality of each program very high. Our schedule is usually 70% booked about one year in advance and we have been focusing on having a more European approach to guiding with small groups of return customers doing one or more trips per year with either or both of us. We have both found that by running programs to a wide variety of places each season we can work very demanding schedules and not get burned out. In the past we have each worked in environments where we climb the same mountain over and over all summer and we found that after a certain number of trips the quality of later programs suffered.