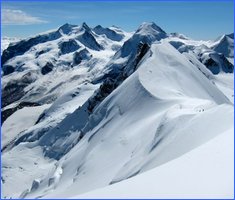 »
Cost Includes
»
Cost Does Not Include

Monte Rosa and the surrounding 4000 meter peaks have historically been one of our most popular summer climbing trips in Europe. Zermatt is a picturesque, historic mountain town and provides the ideal base for a week of alpine climbing. We also travel to the Saas Valley for our acclimatization climbs giving you the opportunity to see more of the local alpine terrain. An excellent ski lift and train system shortens the approaches to various peaks and huts and allows us to cover a wide variety of terrain in a short period of time.

In 6 days of climbing you will have the opportunity to climb 4-4000 meter peaks. We generally build toward the ascent of Monte Rosa’s Dufourspitze, the highest peak in Switzerland and the second highest in Europe. If Monte Rosa is out of shape we have the option to tackle shorter climbs accessible by lift above Zermatt such as Castor (4223m), Pollux (4092m), and the Breithorn (4164m). As many of our customers are return visitors, we make sure to mix up the offerings so that you do not need to do the same route or peak twice.

Many of our American clients are immediately drawn to Mont Blanc and the Matterhorn. While these are excellent peaks, people can be a bit surprised by the number of people climbing the routes in good weather. These climbs offer a more relaxed, less overrun feel and are a great way first experience for climbing in the alps.

One advantage of climbing in this area is that the schedule can often be modified to accommodate changes in weather and route conditions. We generally make hotel reservations for the start and end of the trip and then book huts and rooms as needed during the trip. These mid-trip modifications are relatively easy as Zermatt is set up for climbing, which often involves weather changes.

Day 0: Group will meet in Zermatt in evening to check equipment and go over the plan for the week.

Day 1: In the morning we transfer to the Saas Valley via train and bus to the small village of Saas-Grund (1559m). From here we take the lift to either Kreuzboden or Hohsaas and then walk to the Wiessmies Hut (2726m) where we drop some of our gear. We then head over to climb the Jagihorn. We have two options for the ascent. We can either climb the excellent via Ferrata or climb one of the long, easy face routes direct to the summit. Those with little rock climbing experience will opt for the via Ferrata, which is also a good option if things are too wet for climbing the face route. The face route involves 14+ pitches on moderately steep rock with spectacular views and relatively easy rock climbing. From the summit of Jagihorn we get good views of the Lagginhorn and the Weissmies. We descend to the Weissmies for dinner and spend the night. If someone in the group needs a refresher in the use of ice axe and crampons, this can be accomplished in place of the Jagihorn climb.

Day 2: On this day we will get up early and head for the Lagginhorn, located just behind the hut. The climb of the Lagginhorn is generally mostly walking on rock. If there has been recent snow the top third of the climb often involves steep walking on snow with crampons terminating on the very small and airy summit. Once we get to the summit we reverse the route and come back to the Wiessmies Hut for the night.

Day 3: Today we tackle the Wiessmies. To reach the climb we hike back up to the Hohsaas and drop onto the Trift Glacier. The route appears improbable as it winds its way up to the ridge avoiding the steepest sections of glacier and thread through an interesting icefall. We generally start in the shade and then gain the spectacular, sunny ridge, that eventually leads to the summit. There is no rock climbing on the route, but snow climbing is very spectacular. Once on the summit we reverse the route, pick up our gear, ride the lift down and return to our hotel in Zermatt.

Day 4: Take the Gornergrat train up and then hike to the Monte Rosa Hut (2,883m). The hike begins on trail, then traverses a section of dry glacier before ascending via a climbers trail to the hut, which is one of the nicest in the alps. We spend the afternoon relaxing in preparation for the climb the next day and a very early departure. This is not exactly a rest day, but it provides a nice break from climbing as we prepare for our ascent of Monte Rosa.

Day 5: Climb the Dufourspitze (4634m), the highest peak in Switzerland and second highest in the alps. The climb is overall fairly moderate, but can be very strenuous. It generally takes around 10-12 hours round trip. We return to the Monte Rosa Hut for the night.

Day 6: Descend to the Zermatt and program close. This also serves as an alternate day for other climbing if our program is delayed by weather earlier in the week. One option on the descent is to grab one of the excellent moderate rock routes on the back side of the Rifflehorn, one of the peaks Mark Twain climbed on his trip to Zermatt way back in 1878.

*For those who determine that the climb of Monte Rosa will be too difficult, we generally go after some of the 4000 meter peaks above Zermatt such as Castor, Pollux, and the Breithorn.

Breithorn (4164m): The Breithorn has three summits (West-Central-East). The most commonly climbed is the West via the SSW flank (F). This is almost certainly the most climbed 4000 meter peak in the alps given the relatively easy approach via the tram at the Klein Matterhorn. The ascent requires us to rope up, and use ice axes and crampons on a snow climb that is generally around 30 degrees in steepness.

Castor (4223m): The standard route on Castor is via the WNW Flank (PD+). The climb mostly involves steeper snow climbing that in some years tops out around 35 degrees, but can be steeper at the finish if things are melted out. If snow conditions present a hazard we also have the option of climbing the NW Ridge. We want to climb this early in the day before the slope heats up. Once we gain the ridge the walk to the summit is via a moderate, yet exposed and magnificent ridge.

Pollux (4092m): We generally climb Pollux via the SW ridge (PD+). The route begins with a moderately steep snow climb and then works through a series of easy rock bands before getting to the crux of the route. The difficult section has a piece of thick fixed line installed to speed climbers through the steeper rock pitches that deposit you on the ridge proper. Once on the ridge we follow moderate snow slopes to the summit. We generally climb the rock sections with crampons on.

Dufourspitze - Monte Rosa (4634m): The biggest challenge of the Dufourspitze climb is the length. The summit day involves an ascent of 5744 feet. The lower portions of the route involve a moraine hike followed by moderate snow and ice slopes. Eventually we reach a short, steep, snow slope that provides access to a narrow rock ridge that leads to the summit. This day generally takes 10-12 hours from hut to hut.

Lagginhorn (4010m): This route varies quite a bit in difficulty and hazard depending on the amount of snow on the route. With no snow it feels like a steep, strenuous hike with significant exposure and with snow on the route it requires great care on the upper slopes along with the use of ice axe and crampons. The overall difficulty is rated PD if climbing the Normal route, the West Ridge.

Weissmies (4017m): Great peak located in the Saas Valley, which lies adjacent to the Zermatt Valley. We first climbed this when chased off of Monte Rosa by bad weather and have come to enjoy it as an objective in itself. It provides a nice mixture of steep walking, massive panoramic views, and things are a lot quieter than in the Zermatt area. We generally spend the night before in a hut, but is possible to climb in one day from the Saas Valley.

Trips to consider prior to Monte Rosa

Getting to and from Zermatt

The Swiss Train system makes this relatively straightforward. It takes about 4 hours from the airport in Geneva, Switzerland or 3.5 hours from the airport in Zurich, Switzerland. No cars are allowed into Zermatt, so those that drive will need to park in Tasch, a short train ride down valley from Zermatt. Once in Zermatt it is very easy to get around and hotels located more than a few minutes from the train station will generally send an electric car to pick you up when you arrive. We can help with logistics once you are on the trip.

While in the mountains we stay in comfortable mountain huts and when in town we provide a range of hotel options depending on your budget. Lodging is included in your stay in Zermatt and we generally use an excellent, small hotel conveniently located near the train station. Over the years we have spent a lot of time here and have gotten to know the owners very well.

Registering for your trip

After familiarizing yourself with the program on our website, you will want to drop our office an e-mail, or give us a call at 509-548-5823 to discuss your trip. There are many, many ways that this trip can be put together and you may want to visit other areas in France or Switzerland to prepare for this trip. We can often take two programs that by themselves would take 6 days each and combine them to form a seamless program that visits all the same spots in fewer days. Once you are certain what trip you would like to do, complete our application and return it to our office. These programs are very popular and it is not uncommon for summer to book up 6 to 9 months in advance.

Link Zermatt-Saas 4000'ers to another trip

We put the summer schedule together in a way that allows you to link programs to build a classic 2-week adventure in the alps. We have built a day or two between the trips to give people the chance to transfer to another location and meet up for the second leg of your trip. If you link two trips in the same summer we can offer a 5% discount in the cost of both trips.

Can I organize alternate dates?

Yes. The key limitation is guide availability. If interested in a custom program, contact our office at 509-548-5823 to see when we could do this. Early on we have lots of flexibility, but as summer approaches we often have all of our guides booked for set-date programs. For groups of 2 or more the pricing would be the same as the set-date, all-inclusive price. For single climbers the cost will go up substantially.