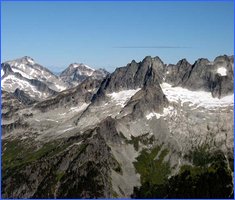 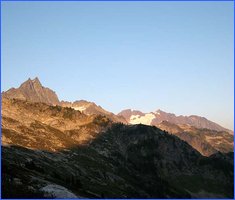 Mount Torment is located just west of Forbidden Peak and is an excellent one-day outing from Boston Basin. The rock climbing sections on Mount Torment's Southeast Face are much easier than those found on Forbidden, but Torment is not without its obstacles. A great climb if done by itself, and a much bigger adventure if combined with an ascent of Forbidden Peak's West Ridge as part of the Torment-Forbidden Traverse.

For climbs of Mount Torment we typically approach via the Boston Basin Climber's trail, and then hike to the higher of the two climbers camps (this is the one under the Unnamed Glacier on Forbidden Peak). From this camp we traverse west under the spur ridge coming off the Torment-Forbidden Traverse and then ascend rock slabs and finally the glacier before reaching the base of the route. The climbing route follows the path of least resistance to the notch on the east corner of Mount Torment. While not overly difficult, the climbing is interesting and at times steep as we work our way to the summit of Mount Torment.

This is a good outing to combine with ascents of Sahale Peak and Sharkfin Tower as part of a moderate tour of Boston Basin. This is also the usual start of the Torment-Forbidden Traverse. For climbers looking for a more challenging line to the summit of Mt. Torment, we recommend the SE Ridge or climbing Torment in combination with Forbidden Peak via the Torment-Forbidden Traverse (grade IV, 5.7).

Most climbs of Torment are done in combination with other peaks in the area.