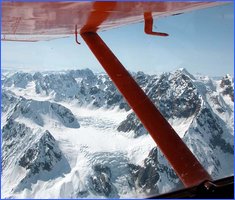 As of 2019 John has guided 23 expeditions to Denali and reached the summit 19 times. Olivia has guided 10 trips and reached the top on 8. Over the years we've helped well over 100 people reach the summit of the highest mountain in North America. While we generally don't look to do the same expedition year after year, Denali is a special place for both of us, and we annually feel the pull to return to the quirky town of Talkeetna, Alaska each summer for another go at the "Great One." What makes this relatively non-technical climb so special are a variety of factors including: the frontier feel that remains in parts of Alaska, flying in small planes with skis, a community of friends that return to the mountain each year, a trip length that is neither too short nor too long, and the opportunity to spend several weeks with the same small group of people.

A climb of Denali seems to naturally break into four stages. During the first stage we fly to Alaska, meet in Anchorage, drive to Talkeetna, pack and repack and eventually fly to the Southeast Fork of the Kahiltna Glacier. Once on the mountain we review crevasses rescue, organize loads of equipment, dig a base camp cache, and finally rig and pack our sleds for the big pull to Camp 1.

The second stage starts when we leave Kahiltna Base Camp with all of our gear and ends when we establish camp at 14,200 7-8 days later. We usually begin the climb with 21 days of food and fuel and average about 120 lbs. of food, fuel, and equipment for each climber. While traveling up the Kahiltna Glacier we divide this huge load between our packs and sleds (called a single carry) as we move along lower-angled slopes to our camp at 7800'. 7800' is where the Northeast Fork of the Kahiltna Glacier meets the main body of the Kahiltna. From here the slopes get steeper and single carrying is no longer a reasonable option so we split our loads into two halves, carrying one half up on one day and then returning with the second half a day later (called a double carry). This "climb-high, sleep-low" strategy allows us to transport all that weight up the mountain without hurting ourselves or running into problems acclimating to the thin air. We generally camp at 7800', 9,700' and 11,200' while making double carries before finishing the second stage and arriving at our advanced base camp at 14,200'.

The third stage involves caching gear above our advanced base camp at 14,200', and eventually moving to our high camp at 17,200' before making our summit bid. We always build some rest days into our time at 14,200 and have the entire group climb to 16,200 via fixed lines as part of our acclimatization schedule at advanced base camp. Eventually we are able to establish high camp at 17,200 and are in position for the summit day.

Summit day on Denali is a tough and this is where our careful planning, slow pace, and John and Olivia's previous experience pay off. The climb generally takes between 12 and 14 hours roundtrip. Having been on this section of the mountain a combined 22 times we believe that this is a reasonable amount of time for normal folks to safely get up and down. Our always-low ratio between guides and clients ensures that you are going to get all the attention you need on this big day. We usually spend 8 hours ascending, 30 minutes to 1 hour on top, and 3-4 hours descending back to high camp. The summit day is a rewarding day that only let's up in the final few yards leading to the highest point of North America, Denali's South Summit at 20,320'.

Stage four is everything that occurs after we return to high camp and until we board our flights home in Anchorage. The descent from high camp to the Southeast fork of the Kahiltna usually takes about 2 days and can be nearly as difficult as the climb itself. In an effort to keep Denali pristine for the next group, we pull all our leftover food, fuel, and garbage off the mountain with us.

We tell people to allow themselves 28 days door-to-door to climb Denali. Most trips do not use up this much time (our average time on the mountain is about 17 days) but Olivia and I both can point to trips where we found that an extra week of waiting out storms allowed us to summit.

Note: In our combined 24 expeditions to Denali, the average trip has taken 17 days roundtrip. Fast trips take 15-16 days, and long trips take as many as 23 or 24 days.

In order to climb Denali you need to have completed the equivalent of a basic mountaineering seminar. We offer a Denali Prep Course and can also recommend other suitable training programs. Skills you should be familiar with include use of the ice axe and crampons, snow camp construction, climbing fixed lines, glacier travel, and crevasse rescue. We offer a Denali Prep Seminar that is good preparation for your climb of the mountain.