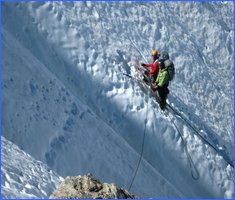 Mt. Buckner is located in North Cascades National Park and its remote North Face is a much sought after goal for Northwest climbers. Buckner is the highest peak in Skagit Country and the third highest peak in North Cascades National Park. The North Face and North Face Couloir routes both provide surprisingly moderate 40-50 degree snow and ice climbing above the massive and wonderful Boston Glacier. While extremely fit parties can do this route in a long day from either the Boston Basin or Cascade Pass trailheads, most groups will want to spend 3 days doing the climb.

It is common for Buckner to be an add-on for trips basing out of Boston Basin, but we think that it runs better as a stand alone trip, given the strenuous nature of the approach and descent from this remote. Mt. Buckner lies east of popular Sahale Peak (8680') and NE of magnificent Goode Mountain (9220').

This is a sample itinerary:

Day 1: Park at Boston Basin Trailhead (3200'), hike into Boston Basin, and ascend the Quien Sabe Glacier to the Boston-Sahale Col. Traverse and scramble behind Boston Peak to gain the Boston Glacier and camp about 1 hour from the base of the N. Face

Day 2: Up early and traverse to the base of the North Face of Buckner, climb 8-13 pitches of 40 to 50 degree snow/ice to the SW summit (9114') and then descend the Southwest side of Buckner into Horseshoe Basin. Either camp in Horseshoe Basin ascend to Sahale Glacier Camp. Strong parties could hike out at this point, but it is a long day.

Any climb of Mt. Buckner requires participants to have previous climbing experience. Those attempting the North Face or North Face Couloir routes should be efficient at climbing moderate snow and ice and should be able to climb 5.6 comfortably. Additional days can be added to any trip to work on these skills before the climb.